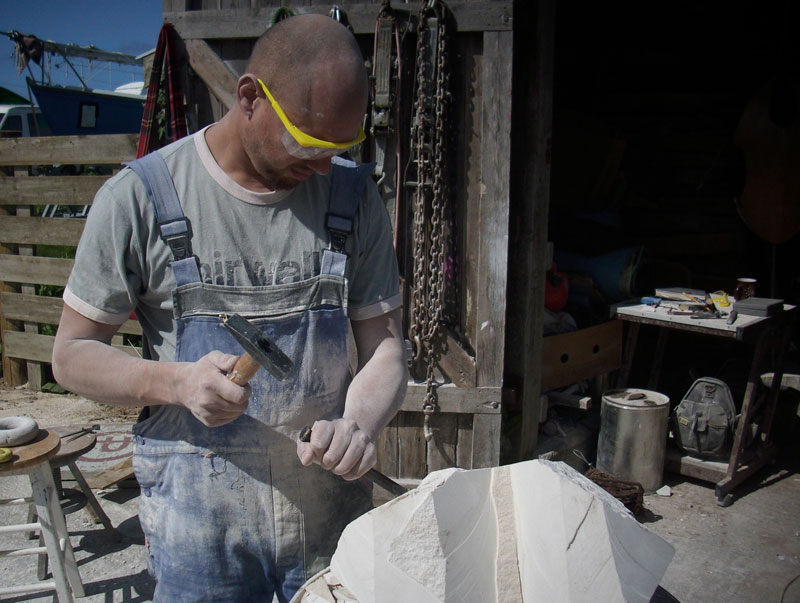 Dan Miles is thoughtful. He speaks as if he is unfurling a scroll of steamed bark. Similarly, he unravels, rather than sculpts his organic forms. These outward forms, in their unity, reveal the quintessence of slow making - the incantations of the meditative mind.

Subtle Rhythms observed in the drawn and dancing body (Dan draws the figure well, he also dances ) pervade his work: the sculptures feel as through they are born from a distillation of his being - made in the flow of life as opposed to being designed from a purely intellectual process.

The desire is to make something whole, tenderly. Dan’s sculptures, although abstract, exude ‘a fatherliness’ which is perceptible in some of Henry Moore’s work and in the pale sleeping heads of sculptor Constantine Brancusi. Daniels’ forms have a beautiful presence. They are vessels for human emotion and like small creatures, demand gentle touching.

It is significant that Dan Miles worked for Greenpeace for eighteen years. Dan is true to his word of ‘fix not throw,’ wasting nothing, recycling everything. Found logs of ash and oak, beech and cherry, are slow-carved after a preparatory bout of hack and hew, each piece taking up to two years to resolve. Dan tells me the material is irrelevant, its about exploring form, about not knowing or pre-empting the outcome.


“In those moments when we are not in control and remain open to possibility we are exposed and vulnerable. I have to trust in feeling my way through the darkness , follow the scent of an idea to its conclusion or its many possibilities.”

Emotional complexity adds weight to Dan’s work. He speaks earnestly about his psychoanalysis. Looking at a carved piece of pale Ancaster stone titled ‘That Which Binds Us,’ old hebrew words come to mind. ‘He heals the broken hearted and binds up their wounds’ as well as Nietzsche’s Pathos of Truth, stating the importance of art and emotion to society. It is a powerful and conceptual work - the image of ‘binding’ can be read in many ways: physical possession, bound by responsibility, or bound by our lack of consciousness.

Since boyhood Dan Miles has revered hand made and simply made artefacts. Largely self taught, he is continually pushing the tensile possibilities of natural materials. Steaming, burning, tannins and wire wool are used wisely - to enrich and unify form. Dans sculpture is anti bourgeois - an artist and environmentalist, he is a resolute custodian of our land, as he should be.