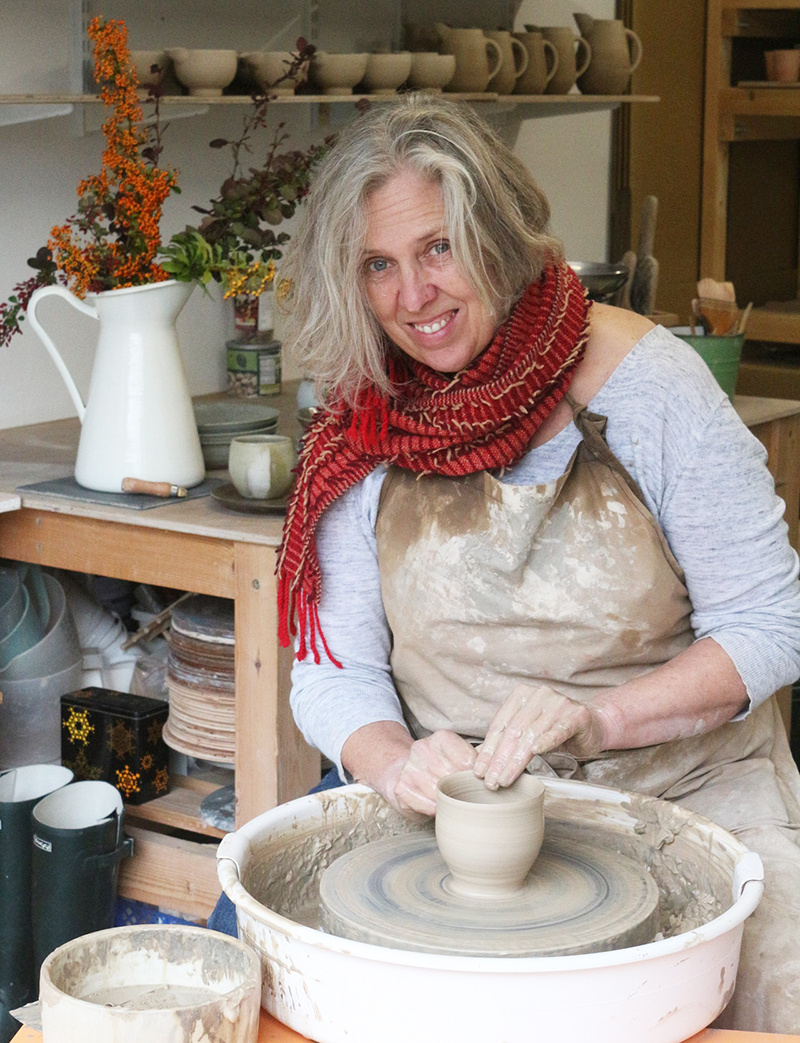 She studied Ceramics at Loughborough School of Art and Design and later in 1990 completed a postgraduate diploma at Goldsmiths College, London.

In 1992 she spent time in Nigeria as a VSO technical volunteer at Dajo Pottery in Makurdi. On her return she started work as Production Potter and apprentice to John Leach at Muchelney Pottery in Somerset,

When she left 3 years later it was to take up the position of studio assistant to Micki Schloessingk at her pottery in Gower, South Wales and to specialize in wood-fired salt glazed stoneware ceramics.

In 1998 she was offered the chance to go to work in South India as Lead potter for The Potters shed trust and to assist in the establishment of a small scale production pottery in the Kodai- Kanal. She spent a short residency period at Golden Bridge Pottery in Pondicherry at the end of the year, where she met many young potters and artists who are all now established artists and makers throughout India.

She now live in Lyme Regis with my family and she has her own studio at Trill Farm in Musbury, near Axminster.

The stoneware and porcelain ceramics made by Ali Herbert explore simple Modernist forms. Her pots are thrown on the wheel, sometimes altered by hand and fired in a gas kiln. She works with clays from Cornwall and France; traditional clays that respond well to reduction firing.

Overseas travels have enriched Ali’s work with cultural influence and colour. During the 1990’s she was employed as a VSO technical lead at a pottery in Nigeria. During her spare time she filled her sketchbooks with drawings and collected natural objects. Drawing continues to be an active part of her working process and development of ideas.

At her Trill Farm studio in Devon Ali enjoys making groups of work which form into series. She equates the slower time and attention required to work on a group of pieces with the rhythm of the natural world. Themes emerge as she travels along a thread of creative enquiry; stemming from an initial idea and steadily developing into a body of work. This is a measured approach to making – the individual work compliments the flow of tableware production, with repeat wares that become familiar and trademark shapes in the collection.

Her work can be found in The Leach Pottery St Ives, No 56 Penzance,  Bils&Rye, The Devon Guild of Craftsmen, and Messums Wiltshire.